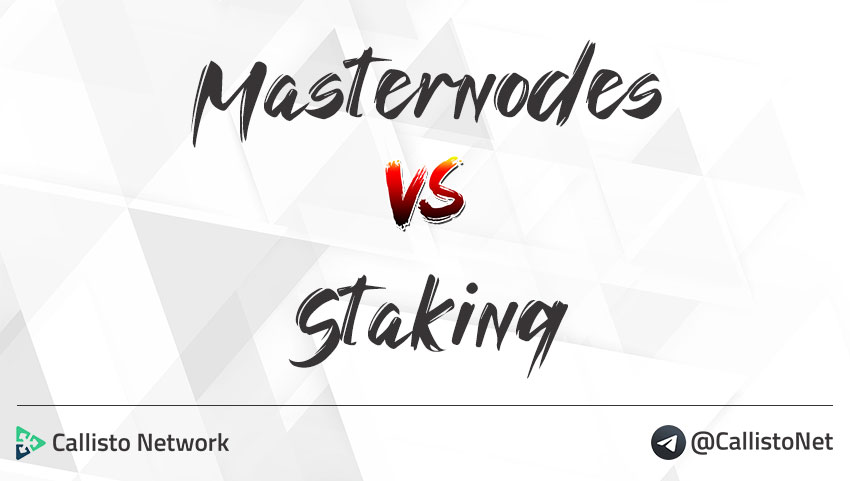 Masternodes or staking, which is more profitable? Many crypto investors have the question on their minds, but what if there is a more profitable alternative?

Round 1: Introducing the Cold Staking

One of Callisto’s unique features is the ability to earn passive income through a process called cold staking. In essence, with cold staking, you lend your funds to the network on a short-term basis, and you are rewarded with Callisto coins, in proportion to the time you stake your funds and the amount of CLO in the reward pool which is funded by 30% of Callisto’s block reward.

The minimum staking period is 27 days and can be extended to continue collecting dividends on staked funds. This allows Callisto holders to effortlessly earn a passive income on their holdings if they do not need to dispose of their coins immediately. Another advantage of cold staking is that it requires no minimum amount.

The smart contract underlying the cold staking has been audited by the Callisto team and was subject to a bug bounty. Therefore, users are assured of their funds’ security during the staking process. (you will find the links to the audit report and the bug bounty in appendix).

Other blockchain networks offer the possibility of earning passive income through masternodes; a more technically involved proposal that typically requires a relatively large investment in terms of the underlying funds and the hardware needed to host the masternode.

Though running a masternode has its advantages (both for the network and for the person hosting it), its barriers to entry put it beyond the average crypto enthusiast’s reach.

Masternodes were originally introduced to incentivize the decentralization and security of blockchain networks by ensuring that participants are invested in the network’s continuity and compensated adequately.

Although masternodes provide functional benefits to the network and financial benefits to the person hosting it, most are currently either too expensive for the average HODLer, too technical, or both. For all these reasons, running a master node is beyond the reach of the average crypto investor.

Final round: Passive income for everyone!

Cold staking offers a simplified lending process, with shorter staking periods (27 days) and no minimum deposit amount. Cold staking’s convenience for the non-technical user allows anyone to earn passive income, simply by holding their Callisto and without the hardware needed to run a masternode.
So, in summary, what are the main differences between masternodes and cold staking?

As illustrated, it should be fairly evident that cold staking offers more flexibility and lower risk than running a masternode. Additionally, it engages all users of the crypto community willing to participate and doesn’t exclude anyone based on their ability to run specific hardware or invest larger amounts of money.

Cold staking is a game-changer in the crypto industry, as an attractive incentive for investors to hold their coins and eliminates the barriers to entry that are inherent in masternodes.

How to make passive income in crypto with Trust Wallet and Cold Staking?

Monthly passive income in crypto with Coinomi and Callisto!

Cold Staking, Passive Income With Cryptocurrency For Everyone.